IZw18: the galaxy that reveals the universe’s history 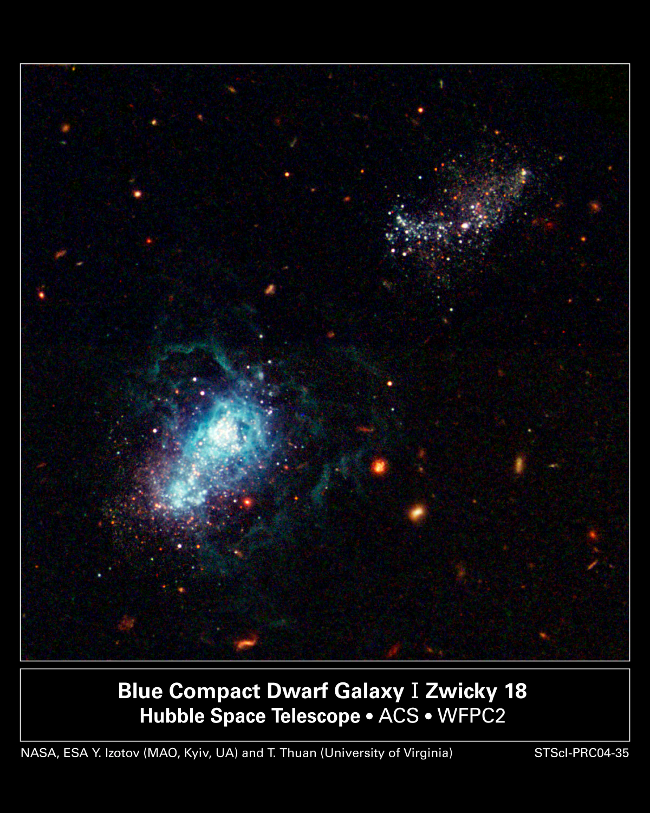 The first galaxies were formed some 13.3 billion years ago, mainly composed of hydrogen and helium, the primary elements that emerged from the Big Bang. Their study to date has been technically very challenging due to their great distance from us, but the observation of analogous galaxies in our vicinity has turned out to be an excellent shortcut.

"Dwarf galaxy IZw18 is the least abundant in metals (in astrophysics, elements heavier than hydrogen and helium) in the nearby universe, and one of the most akin to the primeval galaxies. Its study therefore allows us to catch glimpses of the conditions that prevailed in the primordial universe”, says Carolina Kehrig, researcher at the Institute of Astrophysics of Andalusia in charge of the study that analyses the properties of IZw18.

The study has found a very large region in this small galaxy of ionized helium, which tends to be more frequent in very distant galaxies with low presence of metals. The ionization of helium implies the presence of objects emitting a radiation intense enough to knock electrons off the helium atoms. "In this study we propose a new interpretation of the origin of this radiation in galaxy IZw18, a subject which is still enigmatic”, Kehrig says.

Using the PMAS integral field spectrograph of the 3.5 meter telescope at the Calar Alto Observatory (CAHA), researchers have obtained the first detailed map of this region of IZw18 and have analyzed possible ionizing sources.

Conventional sources of ionization, such as Wolf-Rayet stars – very massive and with very violent stellar winds – or shocks generated by remnants of supernovae, cannot provide the energy necessary to explain the halo of ionized helium present on IZw18, so researchers considered other possibilities.

"Our data point to the fact that extremely hot stars, such as supermassive stars with low metal content or massive stars practically devoid of metals may hold the key to the enigma of the excitement of helium on IZw18, even though the existence of these stars has not yet been confirmed by observations on any galaxy”, says Carolina Kehrig (IAA-CSIC).

We would be talking about very hot stars analogous to first generation stars (known as Population III stars) which, according to theoretical models, would be composed only of hydrogen and helium and could be hundreds of times more massive than the Sun. These stars are believed to have played a decisive role in the “reionization” of the universe, during which period the first stars and galaxies became visible and which is still little known.

This study shows how it is possible to extract information about the history of the universe within our own galactic vicinity.