Stellar formation shoots are observed in a type of galaxy where, in theory, stars are no longer born

CALIFA project allowed to detect, in three early-type galaxies, a very tenuous arms where stars are being formed.

The data, obtained with Calar Alto Observatory 3.5m telescope, contradict the widespread belief that in old galaxies stars are no longer born.

Early-type galaxies are characterized by their spheroidal shape, lacking in remarkable features, and by their reddish color that comes from a very aged star population. They are very massive galaxies where star formation stopped billions of years ago. However, an international astronomers team has found, in three early-type galaxies from the close universe, a very tenuous structure similar to the spiral galaxies arms that has star under formation.

“According to our current vision, the designs with shape of big spirals are associated with disc shape galaxies, as the Milky Way or M101. These ones are, generally, regions where star formation is very high. This is because we were so surprised when discovering similar characteristics in early-type galaxies where, in principle, there is no star formation”, Jean Michel Gomes, researcher from Instituto de Astrofísica y Ciencias del Espacio (IA) from Oporto (Portugal), head of this study, points. 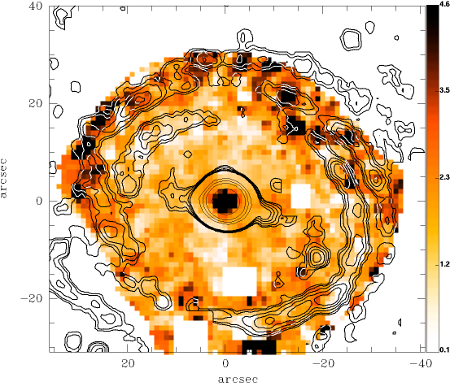 The finding of these spiral arms, really tenuous, has been possible thanks to CALIFA, a project developed at Calar Alto Observatory that uses the technique known as 3D Spectroscopy, which allows mapping whole galaxies and generate maps of their distinct properties, as their star age, their speed or their chemical composition. The data from CALIFA has been combined with SDSS data.

“We’d never be able to detect so weak features without CALIFA”, said José Manuel Vílchez, researcher from Instituto de Astrofísica de Andalucía (IAA-CSIC), who participates in the work. “With the traditional techniques, structures like those were diluted by the backlight of stars, but the spectral sensibility of CALIFA has opened a new scenario in the study of early-type galaxies".

These spiral structures, where massive stars are being formed, constitute a proof that early-type galaxies, in appearance dull, still have a slight growth in their external regions. However, it is still unknown if these stellar formation shoots are the last vestiges of their activity or if it is rather a rejuvenation due to the interaction with smaller galaxies.

Search and study of this type of structures is fundamental in order to understand the early-type galaxies history which is believed they are formed through galaxies fusion processes that have about half the stars the Universe has produced during its history.

This email address is being protected from spambots. You need JavaScript enabled to view it.  958230532