A quarter of century ago, from 16 to 22 July 1994, ca. 20 fragments of the Shoemaker-Levy 9 (SL9) comet impacted onto the Jupiter planet. The very first pictures (see this short movie) of this rare event were taken from Calar Alto on July 16th, 1994 with the MAGIC infrared camera mounted on the 3.5-m telescope.

Near-infrared images (Calar Alto was one of the pioneers of ground-based infrared astronomy) were used to infer the energy of the impacts (up to 6 million megatons of TNT!) and thus the size of the fragments of the comet, entering the dense atmosphere of the giant gaseous planet at velocities over 200,000 km/h. 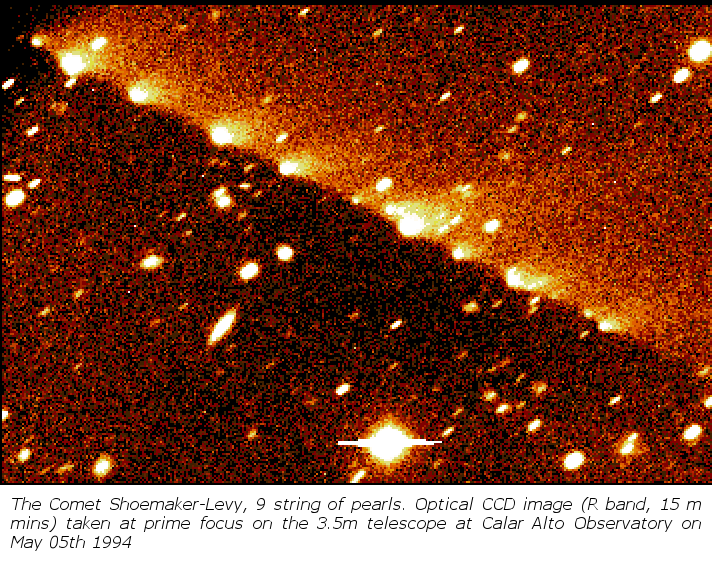 This was the first ever direct evidence of an extraterrestrial, major collision in our Solar System, quite impacting (indeed!) for the general public: from now on, people are aware that catastrophic collisions with Solar System objects may occur and affect their own life on Earth. Today, various “space watch” programs (including an ESA-funded survey with the Calar Alto Schmidt telescope) are ongoing to detect potentially hazardous asteroids and comets. One of the pictures of the SL9 impacts in 1994 even appeared later on on a stamp of the German Federal postal administration!

The German and Spanish astronomers present these days (and nights) at the observatory made a crucial contribution to the study of this uncommon, but not unique phenomenon (another impact of a small asteroid or comet occurred in July 2009, exactly 15 years after the SL9 event) and put Calar Alto at the forefront of research.

The video (in Spanish), just published by IAA/CSIC, celebrates this milestone and includes interviews of direct witnesses of the 1994 SL9 impacts on Jupiter, observed for the very first time from Calar Alto, then other observatories in Spain and worldwide as well as from space.