A nearby green pea galaxy, analog to the first galaxies, shows how the young Universe became illuminated 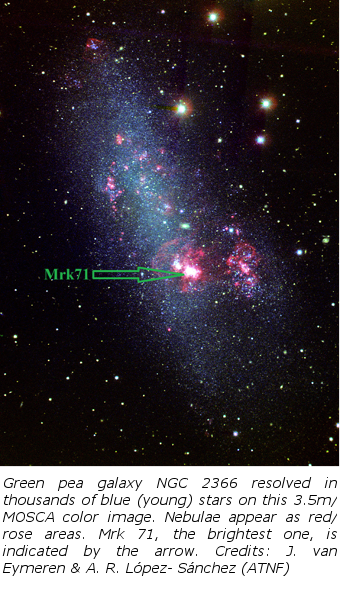 team of astronomers have used on the 3.5-m telescope to study a nearby star-forming galaxy, emitting energetic photons in a similar way to the first generation of galaxies

These first galaxies turned the Universe transparent, less than one billion years after the Big Bang

The young Universe was a dark place. A few hundred million years after the Big Bang, the first stars formed, and their ultraviolet radiation ionized the hydrogen atoms that populated the Universe and absorbed the radiation. This is called the Era of Reionization, and marks the time when the Universe became transparent to light (and, hence, observable). Now, a team of astronomers have used the PMAS instrument at Calar Alto Observatory to study a green pea, a local analog to the first galaxies, to better understand how ultraviolet light escapes and ionizes distant areas, in a process similar to that of Reionization.

“Because of this enormous distance, we cannot observe the galaxies that hosted these first stars, even with future planned extremely large telescopes. The only thing we can do is to find local analogs to such galaxies, and study them instead of their more distant cousins. Astronomers have invented a funny name for them, green peas, because they glow in green light”, says Genoveva Micheva, astronomer from the Leibniz-Institut für Astrophysik Potsdam (AIP) who leads the study.

The closest green pea is NGC 2366, a dwarf galaxy somewhat irregular in shape, looking like the Large Magellanic Cloud. At a distance of only 11 million light-years away from us, NGC 2366 is close enough to be studied in detail: we may even see its bright stars shining individually on images taken with large telescopes, like the one of 3.5 meters in diameter located at Calar Alto.

In the Southern part of NGC 2366 lies Mrk 71, a giant nebula and two clusters of young, hot stars illuminating the gas (mostly hydrogen) around it. Such large nebular complexes are the places of active ongoing formation of massive stars.

Mrk 71 is so large that it dominates the ionization properties of the whole NGC 2366 galaxy, that is, it emits photons so energetic that they are able to remove the single electron of each atom of hydrogen around it. Energetic ultraviolet light, that astronomers think is responsible for powering the ancient epoch of Reionization, is escaping the confines of this galaxy. Because energetic ultraviolet light is extremely sensitive to the presence of gas and dust, and it is readily absorbed and scattered by those, to date it has been unclear exactly how it escapes.

Astronomers from AIP have, for the first time, studied the complex mechanism of the escape of the ultraviolet light using the Potsdam Multi-aperture Spectrophotometer (PMAS) at Calar Alto. Detailed physical analysis of these unique observations has provided evidence for a super-sonic speed outflow of gas.

The outflow starts at a young cluster of stars, tens of times more massive than the Sun, that the Hubble Space Telescope had previously detected. This outflow punches a hole in the gas, which clears the way for the energetic ultraviolet light to escape from the galaxy unimpeded. “We find supporting evidence for this scenario by creating and examining spatial maps of the electron temperature and density, the speed of sound, and the Mach number”, says Micheva (AIP).

The average Mach number (which is the ratio of the velocity to the speed of sound) inside of Mrk 71 is supersonic and increases to hypersonic outside of the core of the region. This indicates a sudden drop in gas density. “We show that this drop in density can be quite dramatic, enough to reduce the gas density to levels completely transparent to ionizing photons”, emphasizes Micheva (AIP).

It is likely that a similar process takes place in the distant Universe, where powerful outflows could puncture the dense gas of their host galaxies and hence clear the way for escape, making the Universe transparent after the “dark ages” of its beginning. 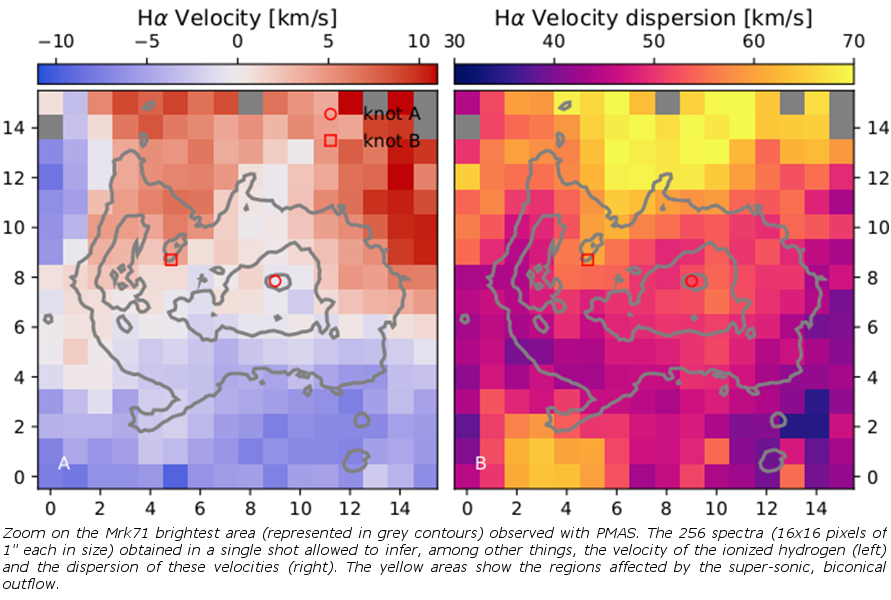 The German-Spanish Astronomical Center at Calar Alto is located in the Sierra de Los Filabres (Andalucía, Southern Spain) north of Almeria. It is operated jointly by the Max-Planck-Institut für Astronomie (MPIA) in Heidelberg, Germany, and the Instituto de Astrofísica de Andalucía (CSIC) in Granada/Spain. Junta de Andalucía is about to take over the MPIA as a co-partner of the observatory.

Calar Alto provides three telescopes with apertures of 1.23m, 2.2m and 3.5m to the general community. A 1.5m-telescope, also located on the mountain, is operated under the control of the Observatory of Madrid.

The Astronomical Observatory of Calar Alto is one of the infrastructures belonging to the National Map of Singular Scientific and Technological Infrastructures (ICTS), approved on October 7, 2014 by the Science, Technology and Innovation Policy Council.