Galaxies co-rotate with their moving neighbors 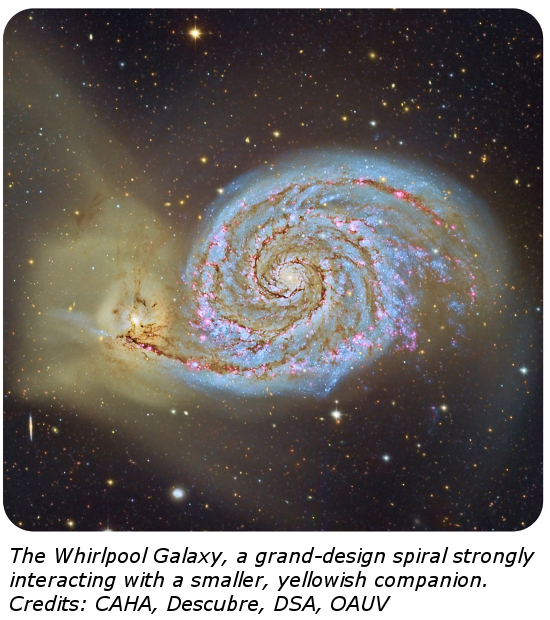 Astronomers used CALIFA data to study the rotation of galaxies and found that the direction in which a galaxy rotates is influenced by its moving companions, even distant ones.

Most galaxies rotate: their billions of stars orbit around a center, or nucleus of the galaxy, like a spinning wheel. In the case of spiral galaxies, the rotation and its direction are obvious, thanks to well-visible spiral arms. But even irregular-shaped galaxies like the Large Magellanic Cloud, or “smooth”, apparently featureless elliptical and lenticular galaxies show signs of rotation when observed with integral field spectrographs, like the PMAS instrument mounted on the Calar Alto 3.5-m telescope.

Also, galaxies are rarely isolated in the Universe, being usually surrounded by various companions. These may be satellites, small galaxies orbiting close by (like the Magellanic Clouds around our Milky Way), or large ones. These neighbor galaxies can interact strongly, or even merge, with the central galaxy, affecting its shape and kinematics.

Apparently, distant companions, located millions of light-years away, should have little influence on the shape and spin of the central galaxy. But a recent study shows that the direction of the rotation of a given galaxy is indeed influenced by the average motion of its neighbors, even those situated at large distances.

Integral field spectroscopic atlases of galaxies like the CALIFA survey, developed at Calar Alto Observatory, gather the motions of stars inside hundreds of spiral, elliptical/lenticular and irregular nearby galaxies, to determine their rotational intensity and direction. But is this ubiquitous rotation inherited from the galaxy formation itself, or other galaxies may play a role on it?

Using data from CALIFA/PyCASSO and other large spectroscopic surveys, a team of astronomers derived the angular momentum, which determines the direction and intensity of rotation of any galaxy, of 445 galaxies. Then, they searched for companion galaxies from the NASA-Sloan Atlas (NSA) in a large area around each of the CALIFA central galaxies.

After a careful analysis, they found that the direction of rotation of the central galaxy is coherent with the average velocities of its companions. The most amazing finding is that companions as far as 2.6 million light-years away, the distance between the Milky Way and the Andromeda Galaxy, appear to influence the galaxy rotation.

“The dynamical coherence even out to millions of light-years was unexpected and surprising to us, because such distances are obviously too far for neighbor galaxies to directly interact with each other” says Joon Hyeop Lee, first author of the study, from KASI at Daejeon, Korea “Nevertheless, since the observational evidence supports the interaction origin of the dynamical coherence, we could not but think of the possibility that it is the vestige of past interactions.” This effect is stronger for relatively “light” central galaxies and more massive companions. While being significant in the outer parts of the galaxy, the rotation in the inner area of the central galaxy seems less sensitive to neighbors. Both of these results support the interaction origin of the dynamical coherence, because light galaxies and particularly their outskirts are easier to be influenced by the perturbations from outside. Furthermore, the latter result is consistent with an inside-out formation scenario for massive galaxies, showing a deep gravitational potential in their inner areas, formed earlier in the Universe, while the outer parts are built progressively and suffer the effects of interacting or even merging (mostly, former satellites) galaxies.

Considering a typical velocity of neighbor galaxies of 180 km/s, a companion now lying 2.6 million light-years away may have passed close to the target galaxy 4 billion years ago for a fly-by interaction. “It is possible that galaxies keep "memories" of past interactions billions of years ago, only if those galaxies have not experienced additional major perturbation since the interactions, which may be possible for some galaxies at low-density environments.” concludes Joon Hyeop Lee.

The study is published in The Astrophysical Journal.