The CALIFA project starts up

The largest Calar Alto telescope, equipped with one of its most outstanding instruments, will devote a significant part of its observing time during the next three years to an innovative and very promising study on the structure, motions and histories of galaxies in the local universe: the CALIFA survey. This project, recently approved, will celebrate its kick-off meeting in Almería in June 2010.

The CALIFA survey will observe sample of ~600 selected galaxies in the local universe, using more than 200 observing nights with the Zeiss 3.5 m telescope of Calar Alto Observatory. For this research, the telescope will be equipped with the PMAS/PPAK spectrophotometer, one of the best integral field spectrographs in the world. 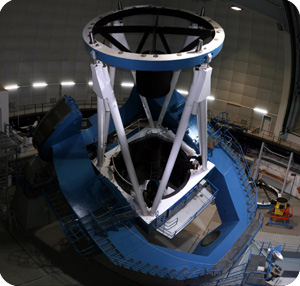 Telescopes are not always used to obtain “normal” images, photographs that may be compared to the shots anyone may take with standard cameras. On the contrary, very often, astronomical telescopes are equipped with spectrographs, instruments that decompose light into its constituent colours. This way, the telescope catches the spectra (the “rainbows”) produced by the light coming from the stars or galaxies. Spectrographs do not yield spectacular images suitable to decorate the walls of exhibition halls, but provide an overwhelming quantity of physical information on astronomical objects.

Until recently, spectrographs could obtain spectra of only a very limited quantity of objects in each shot. But the new technology of integral field spectroscopy allows taking a multitude of simultaneous spectra. This is performed thanks to a clever combination of fiber optics and classical spectroscopic techniques. The integral field spectrograph at work at Calar Alto Observatory, PMAS, in a special configuration called PPAK, uses more than 350 optical fibers to cover a field of view of one arcminute (equivalent to the apparent width of a 1 euro coin placed at a distance of approximately 80 metres. This way, a complete extended object, such as a galaxy, can be fully mapped in detail in just one exposure. This instrument, attached to the Zeiss 3.5 m telescope at Calar Alto, is capable of yielding data with the same quality of a traditional spectrograph attached to a 10 m class telescope, but at a pace more than 20 times faster. PMAS (Potsdam Multi-Aperture Spectrophotometer) was built at the Astrophysical Institute of Potsdam under the direction of M. M. Roth. 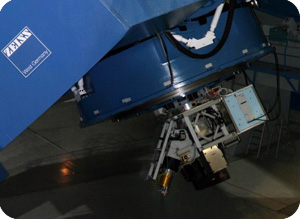 CALIFA will provide the largest and most comprehensive integral field spectrometric survey of galaxies to date, and it will address several fundamental issues on structure and evolution of galaxies: modelling their stellar population, constraining the star formation histories, tracing the gas content, determining its chemical composition and deducing the internal motions of these stellar systems, among others.

CALIFA will make maximal use of the unique capabilities of the PMAS/PPAK instrument, and it will provide a valuable bridge between large single-aperture surveys and more detailed studies of individual galaxies. The CALIFA collaboration comprises more than 50 astronomers from 5 different countries around the world, whose scientific interests will benefit from the use of the derived data. However, the goal of this project reaches beyond this ambitious but limited scope, since it will deliver the raw and reduced data to the public directly, together with tools well suited to analyse them. In this regard, this project is one of the more open ever performed at Calar Alto, and we hope that it will define a new standard for the future management of the data produced at this kind of facilites.

After the recent approval of the CALIFA survey, the CALIFA team will celebrate its first meeting the 7th and 8th of June 2010 in Almería.

© Calar Alto Observatory, May 2010 This email address is being protected from spambots. You need JavaScript enabled to view it.