ALHAMBRA: the history of the Universe, at sight 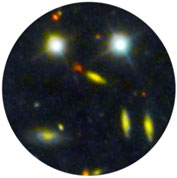 A team of researchers from institutes all over the world and led by Mariano Moles (Instituto de Astrofísica de Andalucía, CSIC), is currently undertaking a large scale survey at Calar Alto that will reveal 90% of the history of the Universe. This cosmic survey, named the ALHAMBRA survey, will cover an area of four square degrees towards 8 celestial regions in both optical and infrared wavelengths. When finished, ALHAMBRA will become the reference work on cosmic history.

When astronomers observe faint and distant galaxies they see them as they were in the very distant past. They detect those bodies not as they are now, but as they were when they emitted the light that we receive today. Baby pictures of the Universe can then be obtained just by looking deep enough at the most distant objects. That is why astronomers are so interested in sounding the Cosmos in search for the faintest and most distant objects. By studying galaxies placed further and further away in space, astronomers study younger and younger objects, and  a reconstruction of the history of the Cosmos becomes possible.

To build an accurate representation of each phase in cosmic history it is necessary to have a considerable quantity of objects detected at each distance interval (that is, at each age interval). For this reason, taking only a deep image is not enough: the survey has also to be wide, extended over a celestial region as big as possible, to ensure a statistically significant and more reliable representation of each phase in the life of the Cosmos.

The last years have witnessed several cosmological surveys that have reached extremely far away covering small celestial areas. Other surveys have covered wide areas, but not reaching far distances. The ALHAMBRA survey was devised to cover the hole between the studies that cover very tiny regions (such as the Hubble Space Telescope "Deep Fields") and those that gather data from wide areas but with small depth (describing, thus, only the local, bright Universe). The name of the project is the acronym of "Advanced Large, Homogeneous Area Medium Band Redshift Astronomical survey".

The ALHAMBRA survey covers a sky area equivalent to 20 times that of  the full Moon. All Hubble Space Telescope well known "Deep Fields" cover areas about 500 times smaller. At the same time, the depth of  the ALHAMBRA survey (that is, how far in distance the survey will reach), will allow the reconstruction of 90% of the history of the Universe. With such a wide and deep sample, it will be possible to observe and measure processes associated to the origin and evolution of many different kinds of celestial objects, as well as to the apparition and development of the different types of galaxies that we observe today. Eight separate sky areas have been selected for this study with the aim of compensating for possible local inhomogeneities, the so-called "cosmic variance", and giving the results general validity.

As already remarked by Sir Isaac Newton in the 17th century, white light is decomposed into a spectrum of colours when passing through a glass prism. It is conventionally accepted that the rainbow colours are seven, just because this was the original description made by Newton. But the truth is that the spectrum of light is a continuous physical entity, and we could identify thousands of colours inside it, if we had enough names for them. The main goal of the ALHAMBRA survey is to determine the nature and distance of as many objects as possible, and it has been shown that the results are optimized (in terms of quantity and precision) if the spectrum of light is divided into 20 equal-width bands or, in another words, into 20 different colours. To this end, 20 specifically designed optical filters are used, from violet to red, and three more filters are added in the near-infrared to further improve the results. As a consequence, this project requires observing every field at least 20 times in the optical portion of the spectrum (with LAICA), and three times in the near infra-red (with OMEGA-2000). Thus, a huge observational effort is required.

The first fields of the ALHAMBRA survey have been already completed, and the resulting images from the 3.5 m telescope of Calar Alto clearly show the spectacular power of this project to reach its main scientific objective, the study of cosmic evolution. This release includes a colour image covering a square with a side of 15 arcminutes (one third of the area of the full Moon), corresponding to one of the fields observed with LAICA. The image displays around 10 000 objects. Most of them are distant galaxies, but it is also possible to distinguish quasars, active galaxies, stars from our own Galaxy and foreground minor bodies of the Solar System (asteroids and, maybe, trans-neptunian objects).

In the figure above one can see enlargements of selected sections of the original image, where it is possible to have a feeling for the quantity and diversity of the extragalactic objects captured, some of them 100 million times fainter than the faintest stars that can be observed with the naked eye. Having data in 23 different filters allows characterizing these bodies and determining the distance to most of them. These measurements are obtained with a precision never reached before in a survey based only on direct imaging, without spectra.

The first images and the foreseen precisions indicate that the final database from the ALHAMBRA survey will contain approximately 650 000 galaxies and close to 5000 quasars and nuclei of active galaxies, all of them with precise distance determinations. The ALHAMBRA database will be an unique tool to study cosmic evolution: the transit from the primitive Universe (an ocean of neutral gas with gravitationally tied zones where density was somewhat larger than the average) to the hustle and bustle of a stellar and black hole hotbed that opened the stage to the relatively quiet contemporary Cosmos, populated by clusters of galaxies, galaxies, stars and planets as ours.

The ALHAMBRA team uses the cameras LAICA (in the optical) and  OMEGA-2000 (in the near infra-red), both attached to the 3.5 m telescope of Calar Alto Observatory in Almería (Spain).

Full colour and high resolution image of ALHAMBRA field F08_01_1. (1.1 MB). This image contains the light catched through 14 of the 23 ALHAMBRA filters, from 396 nm to 799 nm. The processing of this image emulates the colours that these objects would display if they were observed by the human eye. To this end, each filter has been assigned to an elementary colour (red, green, blue), according to the eye sensitivity curve (filters in the range 700-800 nm were treated as pure red). The image processing has been done with the software PixInsight Standard.