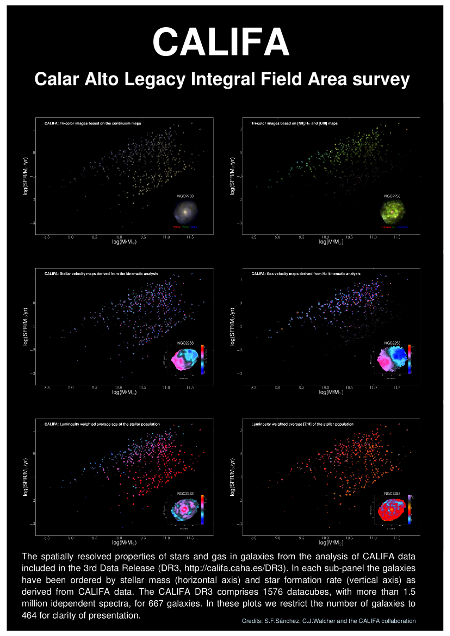 Today are released the data that complete the survey and which provide to the international scientific community a unique tool for understanding the structure and evolution of the galaxies.

"Calar Alto Legacy Integral Field Area Survey" Project (CALIFA) will release today the data collected through more than six years of work and that constitutes the biggest set of data about the spatially resolved properties of galaxies up to date.

All data of more than six hundred galaxies are available at: http://califa.caha.es/DR3

Traditionally, galaxy surveys relyed either on image capture, which provides detailed information about galactic structure, or on spectroscopy, which reveals the physic properties of the galaxies (composition, temperature, age…), but without narrowing such characteristics to specific regions. And this can lead to observational biases.

However, CALIFA applies IFS technology that allows taking multitude of spectra per galaxy, thanks to an ingenious combination of optic fibers and classical techniques. In this way, it can obtain about a thousand spectra per galaxy, which allowed us to finally map the history of entire galaxies.

CALIFA is the first IFS study designed explicitly as a legacy project and it constitutes today the biggest study of this kind ever finished.

Data provided by CALIFA will allow us to generate maps with different galaxies' properties as the speed, age of their stars or the chemical composition, between others. This information allows delve into several crucial issues related with the structure and the history of the galaxies that populate the cosmos.

This email address is being protected from spambots. You need JavaScript enabled to view it.  958230532