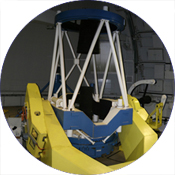 Interplanetary space in the Solar System is not empty. Many minor bodies move among planets. The inner regions of the System receive, from time to time, the visit of ice bodies that, in their approach to the Sun, sublimate and display the usual features of comets. But this area is also populated by a permanent population of minor objects composed from refractory materials (rocky and metallic minerals), with dimensions from tens of kilometres to microscopic sizes. The largest members of this population are called asteroids, but the smaller ones are classified as meteoroids. The frontier between both categories is arbitrary and fuzzy. Object 2012DA14, today approaching Earth and discovered last year from an observatory with amateur instrumentation placed in Granada province, has poorly known dimensions and composition, and lies at this transition zone. 2012DA14 approaches tonight up to a distance below 30 000 km from the Earth surface, even closer than the region occupied by geostationary artificial satellites. To which extent is this phenomenon an exceptional oddity?

Asteroids and meteoroids follow a size and mass distribution that indicates that the smaller ones are much more frequent than the larger. Studies performed at the Astrophysical Institute of Andalusia (IAA-CSIC) on the abundance of these objects at the Earth neighbourhood, and on their distribution in size, point to the fact that bodies similar to 2012DA14 are not infrequent, and their close approaches to Earth are a common fact. As stated by José Luis Ortiz, leader of this research team: “From our studies on meteoroid impacts on the Moon, we conclude that an asteroid with size of some tens of metres approaches Earth within few thousands of kilometres every five years or so.” Following Ortiz and his team, this case is special only because humans have been aware of it in advance, but it is not, at all, an exceptional event. Even more, in Ortiz’s words: “Elementary calculations show, too, that a ten-metre sized object is expected to collide with Earth every 200 years, what agrees with the pace marked by the Tunguska event in 1908 or with later, lighter impacts.”

Ortiz recalls that, not too long ago, the approach and impact of a small asteroid was foreseen: object 2008TC3 fell close to the boundary between Sudan and Egypt, and some fragments of it were even recovered. Also, in February the 14th 2013 a similar meteoroid made impact in Russia. This event had not been foreseen and the first data indicate that it has no relation with 2012DA14.

The IAA team observations will be performed by the astronomer René Duffard, with the assistance of Calar Alto staff, by means of the instrument CAFOS attached to the Zeiss 2.2 m reflector. Thei aim is getting spectroscopic data that will lead to quantitative information on the physical nature of the object. This way, its size will be determined with a precision much better than now, because current estimations rely on a series of assumptions that may turn out to be wrong.