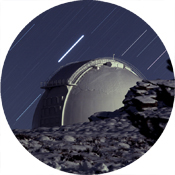 The German-Spanish Astronomical Centre (CAHA), better known as Calar Alto Observatory, has beaten in 2012 its yearly record of efficiency, measured as time devoted to observation.

The 2477 hours of observing time registered in 2012 represent the absolute record during the thirty eight years of history of the Observatory, whose first telescope begun working in 1975.

The Observatory was placed at the Filabres mountain range, Northwest of Almeria city, due to the special characteristics of the place, that make it the best place for astronomical observation in Europe. Year 2012 has followed this trend and its total of 191 cloudless nights placed these twelve months among the upper third of the historical series.

The most outstanding fact is that the record of observing time has been beaten by far, even though the number of clear nights has not been really exceptional for a place such as Calar Alto. This improvement in the use of observing time comes out from the improvements in the organization of work in the Observatory, specially to the generalization of observations in service mode, and to the new instrumental developments for the assessment of sky quality.

This is supported by the fact that the previous yearly record of useful time was registered just the previous year, 2011, that was very similar to 2012 in average atmospheric conditions (193 cloudless nights).

This news certify the compromise of the German-Spanish Astronomical Centre with its community of users, and its efforts to get an optimum profit from the investments done, and from the intrinsic natural conditions of the sky at the Iberic Southeast.