A disintegrating rocket and commercial satellites visible from Calar Alto 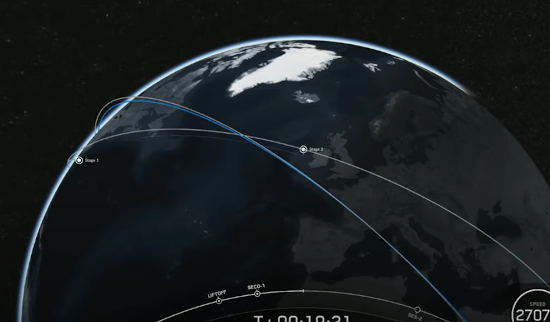 On May 4th, 2021, shortly before 11 pm (Central European Summer Time), the Calar Alto webcam pointing North recorded this video showing a curious phenomenon, visible to the naked eye. Daniel Marín, an expert in astronautics, identified that it was a Falcon 9 rocket from the SpaceX company, launched from Cape Canaveral (USA) on the same day at 9 pm CEST. This partially reusable rocket carried on board 60 satellites for the Starlink broadband project.

The bright central point is the second stage of the rocket and the light halo around it results from the explosion of gases related to the reentry braking maneuver, preventing the spacecraft from going into orbit as space debris and re-entering the atmosphere near Australia, disintegrating. The first stage had already landed on a floating platform (a drone ship) in the Atlantic Ocean, so as to be reused in a future launch.

The rocket and its "cloud" look well illuminated, projected above the domes of the Schmidt and 1.23 m telescopes at Calar Alto, because they are still in sunlight. They are no longer visible when the orbit brings them into the shadow of the Earth. That is why it fades from the bottom up: the lower part is the first to enter the shadow. At the vertical of the 2.2-meter telescope dome, heading north, the phenomenon disappears.

Yet, the "trains" of Starlink satellites (about 1,500 in orbit in May 2021) are seen practically every night, as visible in the second video, taken from Calar Alto with the same camera. This is a subject of growing concern for amateur and professional astronomers around the world, including the International Astronomical Union. In Spain, a working group of the Spanish Astronomical Society, coordinated by the Calar Alto astronomer David Galadí, is monitoring the issue.