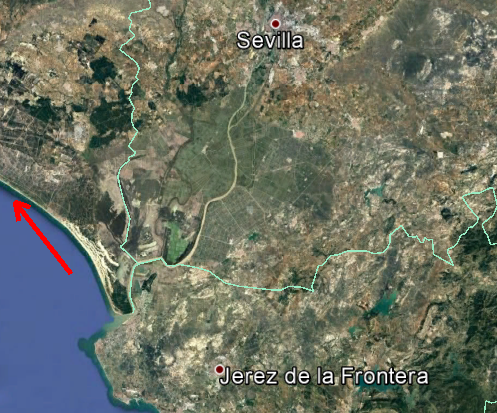 The SMART Project's detector at Sevilla could register this object. At Calar Alto Observatory in Almería, the west surveillance webcam could also follow this fireball.

A detached rock from a comet impacted against our atmosphere at an estimated speed of 220.000 km/h. The initial part of the luminous event started at an altitude of about 120 km above the Gulf of Cádiz (Southwest Spain) and finised at an altitude of 78 km. All its path happened above the sea, as it is shown on the image.

Below are the videos registered at Calar Alto Observatory (Almería). The first video is at real speed while the second one is slow motion. In both cases the blue colour of this object can be appreciated