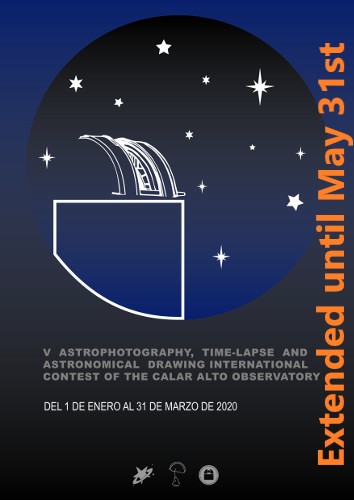 Combining data from the TESS satellite and from various instruments on the ground, CARMENES among others, leads to the detection of a multiple planetary system around a nearby star

The work, which involves researchers from Instituto de Astrofísica de Andalucía (IAA-CSIC), opens the door to the detailed study of multiple planetary systems

The combination of data from TESS (Transiting Exoplanet Survey Satellite, NASA) with observations from ground-based facilities, including the CARMENES spectrograph at Calar Alto observatory (CAHA), has revealed a triple planetary system around a moderately bright star lying only at 31 light-years from us, making it a favourite target for a detailed study. 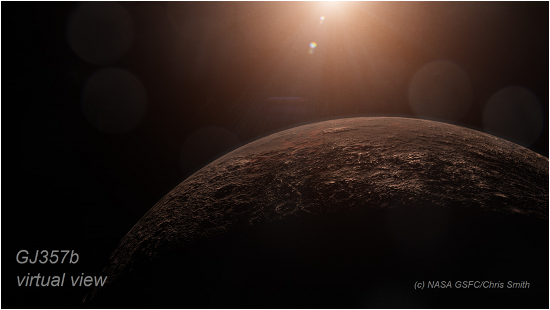 These new worlds orbit around GJ 357, an M-type dwarf star having approximately a third of the mass and size of the Sun. In February 2019, the TESS cameras observed how the star brightness suffered slight drops every 3.9 days, revealing the presence of a transiting exoplanet (transits are mini eclipses produced when planets pass in front of their star).

An international team of astronomers, headed by Rafael Luque from Instituto de Astrofísica de Canarias (IAC), used data from ground-based observatories to confirm the presence of a planet and, meanwhile, discovered two additional worlds. "These planets were somewhat hidden in measurements taken in many observatories for many years; TESS has shown us the way to a star really worth observing”, points out Luque (IAC).

The transits observed by TESS belong to GJ 357 b, a planet 22% larger than the Earth, moving around its star eleven times closer than Mercury is to the Sun.  Without taking into account the heating effects of a possible atmosphere, it would be a “hot Earth”, with a temperature of 252 Celsius degrees. Too hot to host life, but being the third closest transiting planet, it would be among the best candidates available for exoplanet atmospheric studies, a research line already ongoing with CARMENES, co-developed at Instituto de Astrofísica de Andalucía (IAA-CSIC).

To confirm the presenc 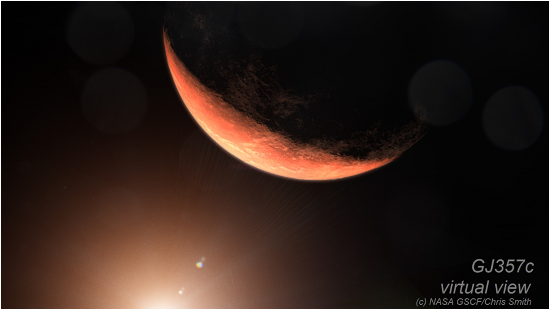 e of GJ 357 b, the research team used existent measurements of the stellar radial velocity (i.e., motion of the star along the line-of-sight) taken from the ground. A planet orbiting produces a gravitational wobble on its star, resulting in a small movement that astronomers can detect with high-accuracy spectrographs, like CARMENES, through slight changes in the colour of the star light.

Ground-based observations dating back to 1998 from the European Southern (ESO), Las Campanas (Chile), Keck (Hawaii), and Calar Alto (Spain) observatories, among others, were (re)examined. They confirmed the presence of GJ 357 b and, surprisingly, revealed additional changes in the radial velocity, thus motion of the star, which lead to the finding of two other planets in the same system.

“This discovery illustrates the power of combining data from space and from the ground, allowing us to derive the mass and density of the planet found by TESS, using spectroscopic observations from Earth, and even revealing the existence of other planets, which otherwise would have been overlooked”, emphasizes Cristina Rodríguez López, researcher at Instituto de Astrofísica de Andalucía (IAA-CSIC), who participated in this finding. 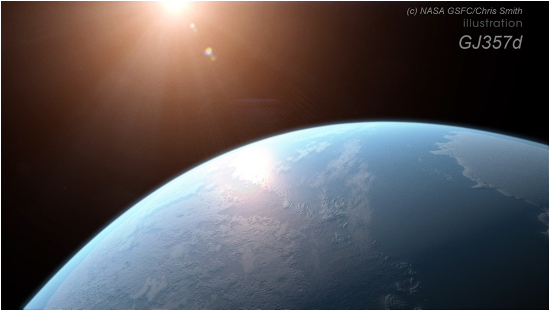 357 c mass is at least 3.4 times the Earth’s and it rotates around its star in 9.1 days, at a distance just over twice the one of the transiting planet, which would give a temperature of about 128ºC. TESS did not observe transits of this planet, which suggests its orbit is slightly inclined with respect to the orbit of the hot Earth, so that it never transits over the disk of its star.

On the other hand, GJ 357 d, the outermost known planet in the system, shows a minimum mass of six times the Earth’s, and it orbits around its star in 55.7 days at a distance equivalent to 20% of the Earth-Sun distance. The size and composition of the planet are still unknown, but a rocky world with this mass would range between one and two times the size of the Earth. With an equilibrium temperature of about 54 Celsius degrees below zero, a dense atmosphere may trap enough heat to allow the existence of liquid water on its surface.