Three studies with the infrared channel of the CARMENES instrument, developed at the Institute of Astrophysics of Andalusia (IAA-CSIC), are published in the journals "Science" and "Astronomy & Astrophysics"

CARMENES opens a door to the study from the ground of the composition of exoplanetary atmospheres, their escape processes and their clouds and aerosols 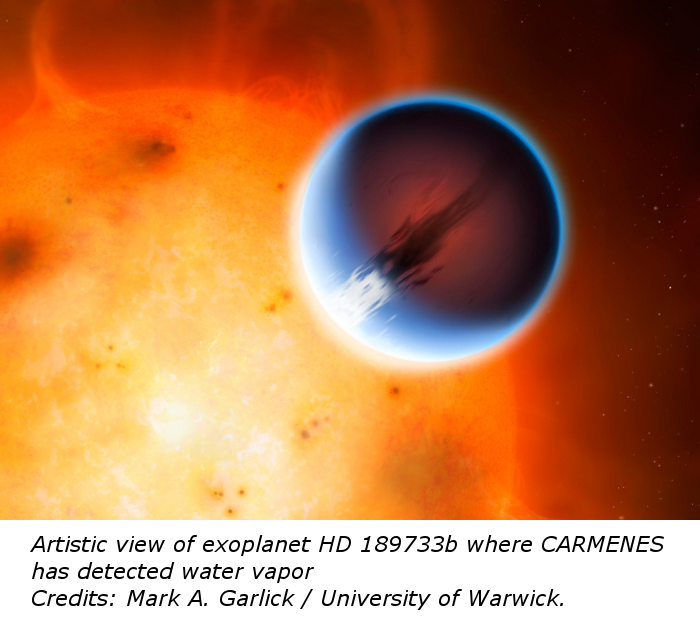 With more than three thousand eight hundred extrasolar planets detected to date, the next step is to describe their characteristics and know these worlds in detail. And CARMENES, a high-resolution spectrograph co-developed by the Institute of Astrophysics of Andalusia and installed at the Calar Alto Observatory (CAHA, Almería), is positioning itself as a leading instrument: it has analyzed the proportion of helium and water vapor in the atmospheres of several exoplanets, offering data with better resolution than those of the Hubble Space Telescope and opening new avenues in atmospheric studies.

"CARMENES is really two instruments in one, observing simultaneously in the visible and in the infrared.This allows us, on the one hand, to make direct detections of planets avoiding false positives and, on the other, to undertake the study of planetary atmospheres The latter is possible thanks to the infrared channel (CARMENES-NIR), which was developed at the Institute of Astrophysics of Andalusia and which is a reference in its field worldwide", says Pedro J. Amado, a researcher at the Instituto de Astrofísica de Andalusia (IAA-CSIC) that has co-directed the development of CARMENES.

A large proportion of the detected extrasolar planets are cataloged as "hot jupiters", very massive gaseous planets that revolve around their star closer than Mercury to the Sun. Their atmospheres suffer an intense stellar radiation that causes a strong erosion, and which in some cases can produce the complete evaporation of the atmosphere.

"Studies of atmospheric escape in exoplanets have been made mostly by studying a spectral line of hydrogen, which requires observations from space," says Lisa Nortmann, a researcher at the Institute of Astrophysics of the Canary Islands (IAC) who heads the study published in Science. But there is another tracer of atmospheric evaporation, helium, which we have observed from the ground with the instrument CARMENES on the planet WASP-69b, and which we interpret as a signal that its atmosphere is escaping and leaving a trace similar to the tail of the comets".

Helium is a very light atom that is found in the outermost layers of atmospheres and that, unlike hydrogen, presents a metastable state, which is known as the triplet of helium, which had been proposed as sensor of exoplanetary atmospheres.

"However, the triplet was not observed until this year, with the Hubble Space Telescope", says Manuel López Puertas, a researcher at the Institute of Astrophysics of Andalusia (IAA-CSCI) who participates in the three works-. But it did it at low spectral resolution, that is, without details. Our observations from the ground present a higher resolution, which allows us to know, after modeling the data, if atmospheric escape occurs, its extension, the speed at which it expands or how much mass it is losing. Thus, we have shown that we have a new method for studying the atmospheres of extrasolar planets, and we hope that it will have a wide application in the future". 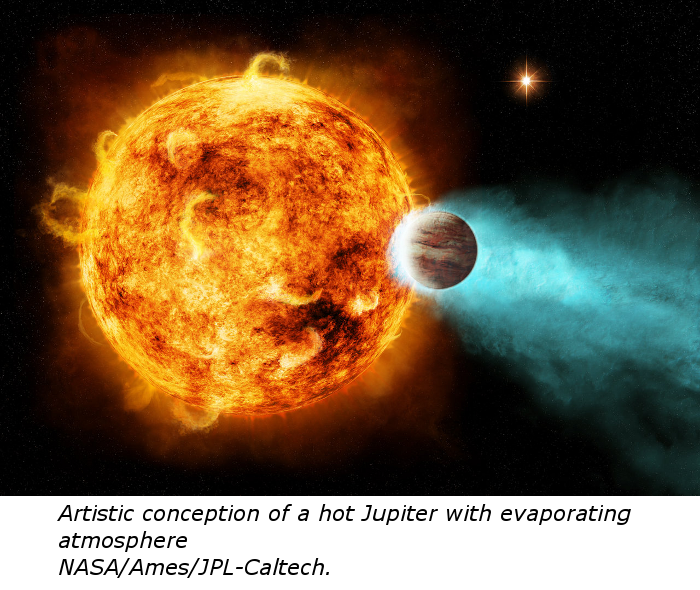 CARMENES has also premiered in the study of water vapor in the atmospheres beyond the Solar System, also in a "hot jupiter" called HD 189733b. It is a compound that had already been detected from space on several occasions, but its detection with CARMENES strengthens the way for the analysis of exoplanetary atmospheres from the ground, with the use of four-meter telescopes as a complement to space telescopes or eight to ten meter telescopes.

The detection of water vapor is complex, and the technique used is different from that of helium. While helium presents a very strong absorption line and is not affected by the Earth's atmosphere, the water molecule has thousands of very weak absorption lines, which are also partially absorbed by the water vapor in our atmosphere. Hence the difficulty of obtaining such signal with telescopes on the ground.

"As a novelty, compared with previous works, we have obtained our data in several and different bands (or spectral regions) from those used up to now, which allows us to use this technique not only to detect water but also to detect the presence of clouds and aerosols. This study opens the door to the study of molecular compounds, such as methane, water or carbon dioxide, in exoatmospheres with CARMENES, "concludes Alejandro Sánchez López, researcher at the IAA-CSIC that is participating in the work.

CARMENES is a unique instrument in the world, both in precision and stability, that works in vacuum conditions and with temperatures controlled to the thousandth of a degree.

CARMENES has been developed by a consortium of eleven German and Spanish institutions. In Spain participate the Institute of Astrophysics of Andalusia (IAA-CSIC), which co-leads the project and has developed the infrared channel, the Institut de Ciències de l'Espai, (IEEC-CSIC), the Complutense University of Madrid (UCM), the Institute of Astrophysics of the Canary Islands (IAC) and the Center for Astrobiology (CAB, CSIC-INTA). It has obtained funding from the Max Planck Society (MPG), the Higher Council for Scientific Research (CSIC) and the members of the CARMENES consortium, with contributions from the Spanish Ministry of Economy and Finance (MINECO), the states of Baden-Württemberg and Lower Saxony, the German Foundation for Science (DFG), the Klaus Tschira Foundation (KTS), the Junta de Andalucía and the European Union through FEDER / ERF funds.