An international team finds an exoplanet with three times the mass of the Earth around the red dwarf Barnard, the closest star to the Sun after the Alpha Centauri system

Just six light-years away, Barnard's star moves in Earth's night sky faster than any other star. This red dwarf, smaller and older than our Sun, is among the least active red dwarfs known, so it represents an ideal target to search for exoplanets. Now, an international team led by researchers from the Spanish National Research Council (CSIC) has found a cold Super-Earth orbiting around the Barnard´s star, the second closest star system to Earth. It is the first time that astronomers have discovered this type of exoplanet using the radial velocity method. The results of the study are published in the journal Nature.

“After a very careful analysis, we are over 99% confident that the planet is there, since this is the model that best fits our observations”, assures the leader of the study, Ignasi Ribas, CSIC researcher at the Space Sciences Institute (ICE) and the Institute of Space Studies of Catalonia (IEEC). “However, we must remain cautious and collect more data to nail the case in the future, because natural variations of the stellar brightness resulting from starspots can produce similar effects to the ones detected”. 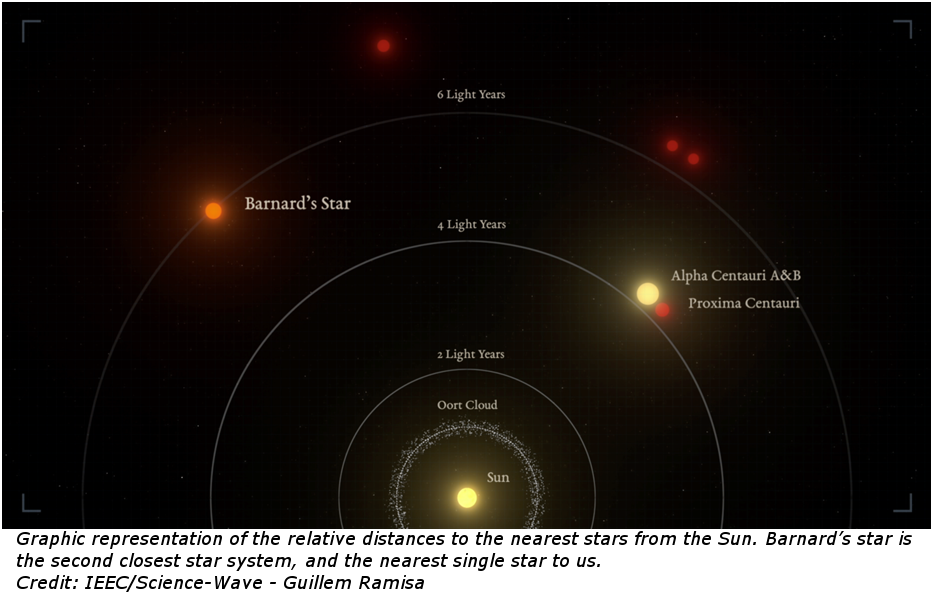 The subtle wobble of the star has caught the attention of astronomers for some time. Since 1997 several instruments have collected a large number of measurements on that oscillation movement. A 2015 analysis suggested that the wobble could be caused by a planet with an orbital period of about 230 days. But more measurements were required.

Attempting to confirm the hypothesis, astronomers have regularly observed the Barnard´s star with high precision spectrometers such as CARMENES, at Calar Alto Observatory. The technique consists on using the Doppler effect on the starlight to measure how the speed of an object in our line of sight changes over time.

"With the radial velocity method, precision spectrometers are used to measure the Doppler effect. When an object moves away from us, the light we observe becomes slightly less energetic and redder. On the contrary, when the star approaches us, the light becomes more energetic and bluish", says Ribas.

"When we re-analyzed all the combined measurements, a clear signal arose at a period of 233 days. This signal implies that the Barnard´s star approaches and moves away from us at about 1.2 meters per second - approximately the walking speed of a person - and it is best explained by a planet orbiting it", says Ribas .

The planet candidate, called Barnard's star b (or GJ 699 b), is a super-Earth with a minimum of 3.2 Earth masses. It orbits its red star every 233 days near the snow-line, a distance where water freezes. Lacking atmosphere, its temperature is likely to be about -170ºC, which makes it unlikely that the planet can sustain liquid water on the surface.

"Exoplanets so small and so far away from their parent star have not been discovered before using the Doppler technique", says Ribas. This means that astronomers are getting better at finding and exploring a relatively new kind of planets outside our Solar System.

“We all have worked very hard on this result”, says Guillem Anglada-Escudé from Queen Mary University of London and co-leader of the study. “This is the result of a large collaboration organised in the context of the Red Dots project, which is why it has contributions from teams all over the world including semi-professional astronomers coordinated by the AAVSO”.

Cristina Rodríguez-López, researcher at the Institute of Astrophysics of Andalusia (IAA-CSIC) and co-author of the paper, comments on the significance of this finding. "This discovery means a boost to continue on searching for exoplanets around our closest stellar neighbours, in the hope that eventually we will come upon one that has the right conditions to host life".

I.Ribas et al. “A super-Earth planet candidate orbiting at the snow-line of Barnard’s star”, to appear in the journal Nature on 15 November 2018