Search for planets with Carmenes successful

Since 2016, German and Spanish researchers are hunting for planets with the Carmenes spectrograph. They have now discovered their first star with an exoplanet. 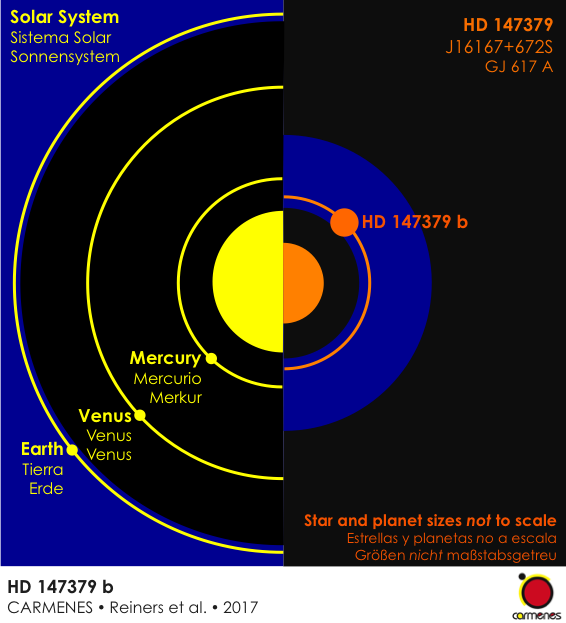 The star is a so-called M-dwarf only about half as massive as the Sun, its planet with the name HD 147379b is slightly more massive than Neptune. HD 147379b orbits its star once every 86 days at a distance that is only a third of the distance between Earth and the Sun. At this location, the planet is located inside the so-called habitable zone where water could exist in liquid form. However, it is unlikely that life could develop on this planet because it probably has no solid surface.

"Carmenes is optimized to find planets inside the habitable zones of low-mass stars because this is where we believe the chances that life can develop are highest“, explains Prof. Ansgar Reiners from the Institute for Astrophysics Göttingen. "Finding our first planet right at this place shows that our search for planets in the habitable zone is very efficient.”

Carmenes was planned and built by a German-Spanish consortium of 11 partners, among them the Institute for Astrophysics Göttingen. “Carmenes is the first spectrograph that simultaneously looks at optical and infrared light. This is an important advantage for the search for planets around low-mass stars”, says Prof. Stefan Dreizler from the Institute for Astrophysics in Göttingen. “Carmenes consists of two spectrographs that were optimized for the search for planets around nearby stars.”

The project is running at least until the year 2020. The scientists want to extend their program beyond this date. Dr. Mathias Zechmeister from the Institute for Astrophysics says: "The discovery of an Earth-like planet often requires more than one hundred measurements. We are searching for these planets around hundreds of stars, and for this we need very large amounts of telescope time.” The scientific results were discussed at a Science Meeting in Göttingen. The Deutsche Forschungsgemeinschaft supports the project through a Research Unit at the University of Göttingen.