CARMENES, a spectrograph that will search for earth-like planets, is a unique instrument due to its stability, very high resolution and because it will observe at the same time in both the visible and infrared channels.

The infrared channel, developed at the Instituto de Astronfísica de Andalucía (IAA-CSIC), will be tomorrow placed in its final location, at the 3.5m Calar Alto Observatory telescope.

“In some months, CARMENES and Calar Alto will be a referent in the search for exoearths”, Pedro J. Amado, researcher from the Instituto de Astronfísica de Andalucía (IAA-CSIC) which co-leads CARMENES project, points. Tomorrow, in a similar maneuver as the one that took place in July with the visible channel, the huge tank which holds the CARMENES “eye” that will see in the infrared, will be lifted up more than thirty meters, held by a crane, to enter within the dome aperture up to its location next to the Calar Alto Observatory (CAHA) 3.5m telescope.

Both CARMENES eyes, which will observe in the visible and the infrared, are housed within two separate vacuum tanks and surrounded by a radiation shield, in order to maintain a stable temperature. These tanks dimensions, of about three meters long and a meter and a half in diameter, force to place them after, literally, blow them up.

And, with this maneuver, CARMENES instrument will be almost complete. “Now we have the assembly and connections of the system tasks ahead and the scientific commissioning that will confirm that everything is working properly. In November we’ll have the infrared channel first light and we will start searching for planets at the end of the year”, Jesús Aceituno, Calar Alto Observatory Deputy Director says.

AN EYE THAT WORKS IN COLD

One of the CARMENES instrument main strength is the fact that it will observe in both the visible and the infrared at the same time, which will allow it to avoid false positives when detecting planets, something nowadays usual to confuse the signals of stellar activity and other intrinsic to the star physical mechanisms with the existence of planets. Observation in both channels simultaneously will allow CARMENES to discriminate between one signal and another, and to confirm findings without need for further checks. 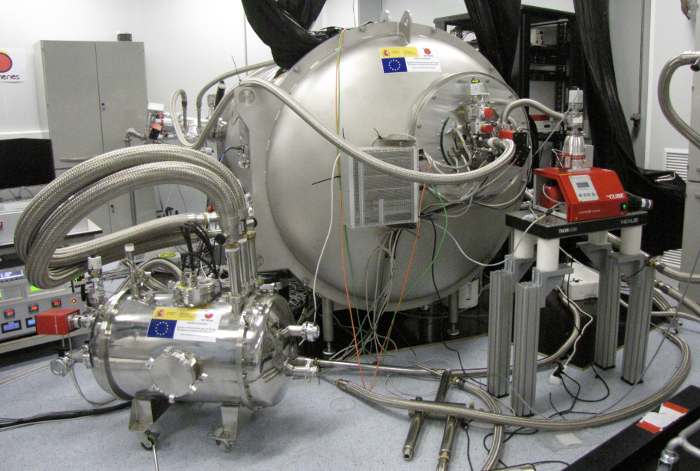 Its sensibility to a wide range of wave lengths into the near infrared, higher than the actual high resolution spectrographs, has supposed a major technological challenge. And also the fact that the sensor operation temperature is close to cryogenics: it has to be at a constant temperature of 133 degrees below zero with stability of the order of a thousandth of a degree. To achieve this, researchers from the Instituto de Astrofísica de Andalucía (IAA-CSIC) and from the European Southern Observatory (ESO), have developed a cooling system (cryostat) that uses a continuous flux of gaseous nitrogen at a low temperature, considered a prototype for the Extremely Large Telescope (E-ELT).

In July 2014, the vacuum tank where the CARMENES infrared channel would be in, arrived at the clean room of the Instituto de Astrofísica de Andalucía. “Barely a year and a half later, the channel is ready for its installation at the telescope, after finishing the jobs concerning optics, mechanics, cryo-vacuum, electronic and software. There are similar projects that took between five and ten years to be completed, so we are very proud of the effectiveness of the team that made this possible”, Pedro J. Amado highlights.

The planets, while rotating around their stars, produce slight oscillatory movements on the stars that, if measured with the adequate accuracy, reveal the presence of those planets (although we cannot see them directly). That’s the way CARMENES will search for planets similar to Earth.

CARMENES is not only the first instrument that Spain proposes to be installed at Calar Alto Observatory, but further it is a unique instrument in the world, in both precision and stability, indispensable qualities for measuring the small speed variations a planet produces in the stars. In fact, CARMENES represents an exciting technological challenge, as it will detect speed variations on stars which are hundred of billions kilometers away, with an accuracy of one meter per second.

To achieve such accuracy, not only a care optical design is needed, but also maintaining conditions of maximum stability in the operating environment of the instrument, which will work in high vacuum conditions and with electronically controlled temperatures up to hundredth of degree. So this instrument is a major challenge for the building consortium, where the Andalusia technology participation highlights.

CARMENES, which will work at Calar Alto Observatory (Almería) 3.5m telescope, is being developed by a cosortium of eleven Spanish and German institutions. It has received funding from the Government of Andalusia, the Ministry of Economy and Competitiveness and the Consejo Superior de Investigaciones Científicas (CSIC).

More about this project: http://carmenes.caha.es